The influence of glass

This article is reproduced from The Building Conservation Directory, 2001 and has been sourced from Buildingconservation.com

Perhaps the most noticeable and yet misunderstood feature of a historic building is that of its glass and the way that glass influences both the atmosphere and ambience of the building.

The influence of glass can be seen both internally and externally, working in a reflective and refractive capacity. Externally, the reflective quality of glass will be most noticeable, varying from the crude slab-like appearance of float glass to the subtle shimmer of period cylinder or crown glass. Internally, handmade glass will influence the softness and warmth of incoming light, as well as the appearance of external views through that glass. The difference between a cold clinical light seen through modern float glass and a warm refracted light through early Victorian cylinder glass is profound.

Glass used for glazing is made by heating together sand (silica) and lime (calcium oxide) at a high temperature with a flux of wood ash or soda to reduce the temperature at which the particles fuse. Modern clear float glass is manufactured from silica (70-74%), lime (5-12%), and soda (12-16%), varying between manufacturers.

Before the industrial revolution, furnaces used to make glass were fuelled with charcoal. The industry was nomadic because production depleted forests for fuel. Silica was taken straight from rivers or quarried sand, with little regard for contaminants. Sands often contained metal oxides which discoloured the glass, and early glasses would rarely have been pure ‘white’ or uncoloured. Beechwood ash, soda lime, and other materials used in the smelting process also added colour to the glass, which was most commonly green or straw coloured. Regular production of white glasses was uncommon until the early 19th century, when consistent materials became available, and more efficient coal- then later gas-fired furnaces were introduced.

It is a commonly held misconception that all historic windows were glazed with crown glass. Both cylinder (or broad) glass and crown glass methods of handmade flat glass production survived alongside each other until the 20th century, when crown glass declined into obscurity. Often harsh taxation regimes tended to promote one method over another, causing variations in production techniques in differing periods. Much mid and late 18th century glass was crown, where thin glass attracted less duty being taxed by weight. However, by the mid 19th century, glass production was again dominated by the cylinder method. Paxton’s 1851 Crystal Palace was built using cylinder glass, made by Chance Bros. of Birmingham. This building used just over 80,000m2 glass, approximately one third of the English annual production at that time. Packington Hall, at Meriden in the Midlands, glazed c1840 has a good mix of both white crown and white cylinder glass. St James’s Church, on the same estate, c1792 is glazed with predominantly crown glass, very active with obvious curvilinear striations, bubbles, and a straw tint.

The earliest and most primitive form of window glass, made by casting molten glass as a thick slab onto a bench or flat surface, often within a mold. Also later used as the base material for mirror and plate glass production, prior to hand/machine polishing and finishing.

A handmade mouth-blown glass made by blowing a bottle-shaped cylinder and removing the two ends. The cylinder is then cut, reheated and unrolled to give a flat piece of glass which is then annealed slowly. Recognisable by naturally distorted movement without pattern. Archaic names: broad glass, forest glass and occasionally, muff glass.

A handmade mouth-blown and spun glass, made by first blowing a sphere which is then opened out at one end and spun into a flat disc. Several panes of crown glass may be cut out of each disc. Recognisable by curvilinear, naturally distorted movement. Often panes are slightly bowed as a result of a secondary annealing process. Archaic name: Normandy glass. 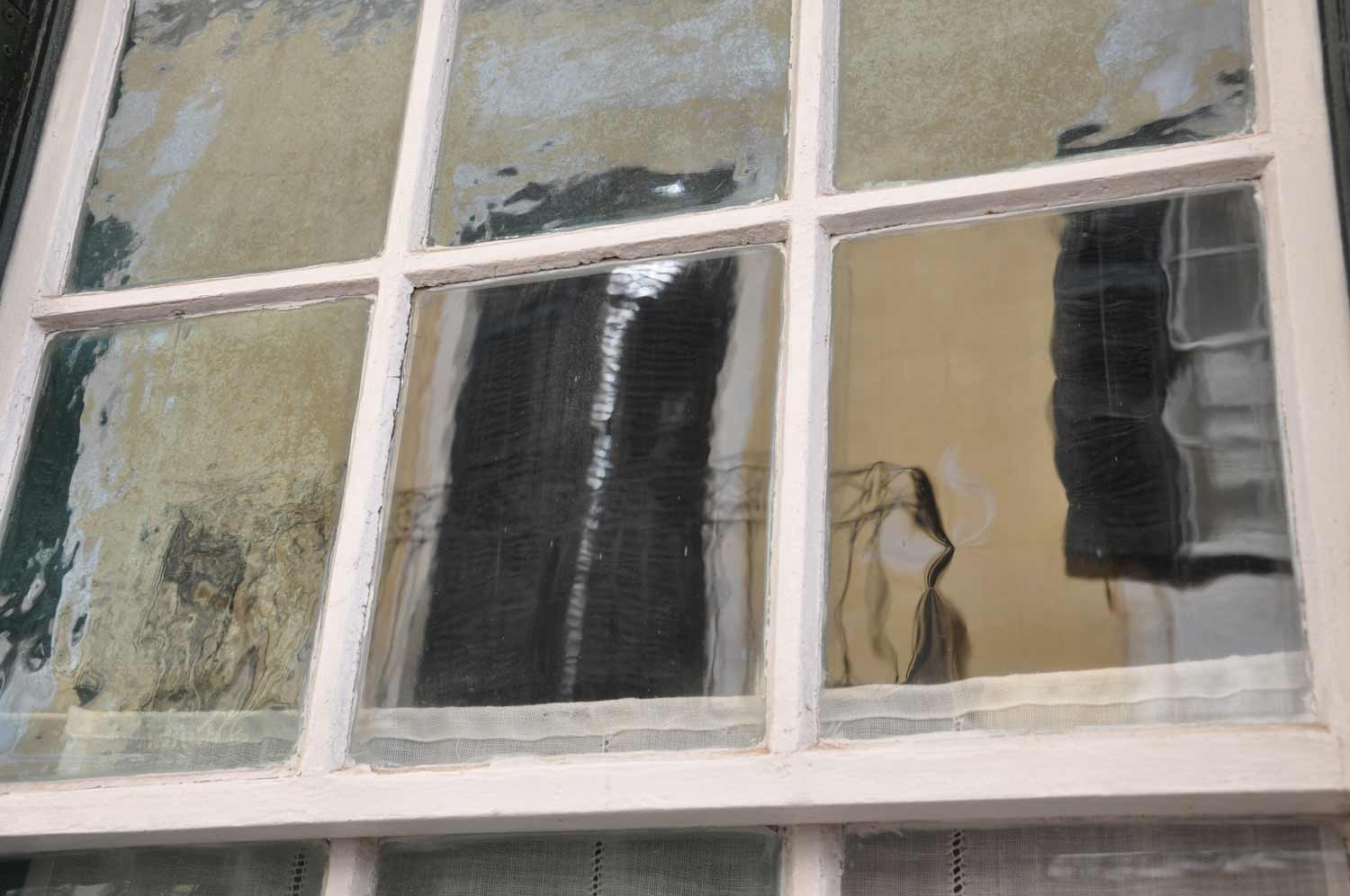 “The difference between a cold clinical light seen through modern float glass and a warm refracted light through Georgian Crown glass is profound.” – BuildingConservation.com

Slab glass, ground and polished on both sides. Used initially for mirrors then grand windows, it was a prohibitively expensive 19th century glass, but was truly flat. Easily replaced today by float glass.

First produced in the early 20th century, this machine-made glass was drawn vertically out of a glass furnace, or Lehr, in sheet form between rollers. Recognisable by some movement in the glass in the vertical plane, but of consistent thickness and flatness. Modern drawn sheet is usually imported from Eastern Europe, for the greenhouse trade. Often called ‘horticultural’ or ‘dutch lights’. Used in an inferior attempt to replicate handmade glass.

The ubiquitous glass of today, made by floating molten glass over a bed of liquid tin. Available since the late 1950s, it is a truly flat, functional glass without movement or interest, visually ugly in historic settings.

The removal of historic glass from timber sash windows and cast iron frames is fraught with difficulty, usually as a result of hard putties and rigid frames. Where new windows are required, the original frames can be sacrificed to save the glass for re-use, but if the frames are to be repaired, extracting the panes requires care and a great deal of time. Even once the face putty is removed, the thin line of putty between the glass and the frame is usually more than enough to keep the glass immoveable. It is sensible to leave glass in situ, reface any lost or damaged putty with new, and refrain from disturbing surrounding framework if at all possible.

The removal of historic glass from leaded lights is not so difficult because the lead cames which support it are flexible, and all surviving glass can and should be re-used when releading historic windows. Nevertheless, there is a considerable risk of accidental damage. Loss of historic glass in the releading process is indicative of poor workmanship. Where historic glass is partially missing, then very similar glasses should be used to complement the originals. The use of float glass alongside handmade glass looks ugly and is again indicative of poor workmanship, resulting in a ‘spotted dick’ appearance.

The beauty of original handmade glass and the way in which it disperses and reflects light is due to the method of manufacture. Minor imperfections, inclusions, and tints of colour impart life and vitality. Selecting new handmade glass which exhibits the same qualities can be difficult, particularly as crown glass glazing is no longer made. Modern, machine-made glass on the other hand, is dull, flat and lifeless, and as inappropriate in a historic facade as concrete blocks in a handmade brick wall.

Float glass, due to its flat perfection is not an appropriate alternative. Float glass that has been distorted in a kiln has an individual appearance markedly different to handmade glass. It is bland to view, has a ‘bendy’ appearance, lacks surface brilliance, and is quite unlike handmade glass. Its use should be discouraged, as the visual impact of this ‘economy’ glass on a building is false and obvious.

Drawn sheet glass, commonly called ‘horticultural’, has some linear movement, though still dull and relatively lifeless. Its only advantage, along with float glass, is price. It is worth remembering that cheap glass looks exactly that: cheap.

Cathedral glass is an obscured textured rolled glass with smooth and rough faces, commonly used in lavatories. Originally hand rolled, it is now machine-made in Germany, America and China.

Pressed patterned glasses are produced in a similar fashion to cathedral glass. Some Victorian patterns are available, mainly as imports from America.

Cylinder glass is a handmade mouth-blown glass, readily available commercially. There are many different types, some produced for restoration purposes, but most are art glasses. Most handmade glass for the stained glass market is produced by this method.

Crown glass is a handmade mouth-blown spun glass which is only available today in the form of small, heavy bullions. True crown glass replicating the fine thin crown glasses typical of the mid 19th century is unavailable, and any modern glass sold today as ‘crown’ glass is likely to be cylinder glass of one type or another. Fine clear handmade cylinder glass is the only compatible glass alternative today.

Care must be involved in the selection of handmade glass: there are many types of cylinder glass, and specifying that term alone is not enough. The exaggerated appearance of many contemporary types of ‘antique’, ‘reamy’ or ‘seedy’ cylinder glasses produced for the art glass market make them poor substitutes for historic window glass.

There are good imported glasses from Germany, France and Poland that are extremely close to old glasses that still survive, and it is these that must be sought out. There is now no handmade window glass made commercially in the UK.

About the Author: Sliding Sash Solutions

We use cookies to ensure that we give you the best experience on our website. If you continue to use this site we will assume that you are happy to proceed.Ok
Go to Top